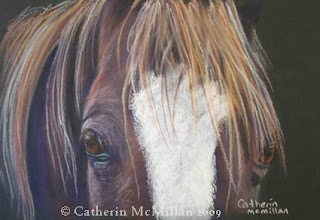 Tranquility
At the end of last year I became involved with Horse rescue a not for profit group how rescue and rehouse unwanted and abused equines. One of there horses is Glow or as Ive called her in this drawing Tranquility. Glow sadly has nose cancer which makes her un-adoptable. To help her and others like her I decided to become involved through my art.
Here is the first in my series of horse rescue works.
6 1/2" x 9" Pastel
$175.00 + postage
Tranquility is for sale with %10 of the sale price being donated directly to Horse Rescue.
Pay pal is available for payment.
email Catherin: catherin@animalarthouse.com
Posted by Catherin McMillan at 8:08 PM No comments: 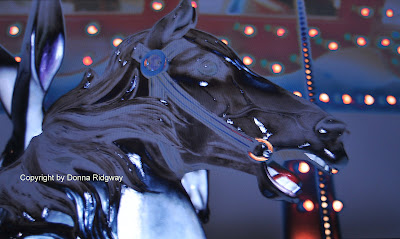 I was kind of bored last night, sitting here watching my screen saver go by on one computer, while I was uploading photos on the other one. My mind started wondering, if my camera would see the same things my eyes were seeing! So I ran to get the camera, changed the lens, and began snapping away.

This is one image I captured, there are more on my personal studio blog. If you leave a comment on that blog, and email me, montanahorsegallery@earthlink.net, I'll email you a free image of one of these screen savers for your own computer.

Thanks for stopping by the Equine Art Blog!
Donna Ridgway

Posted by Donnaallen at 11:00 AM No comments: 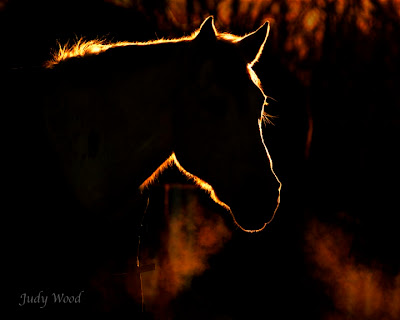 Here's a shot I got a couple of days ago in one of the outdoor turnouts. I'm always interested in rim lighting (backlit images) and this one worked well for me, with a little help from Photoshop to create some mood. The lighter diagonal areas in the bottom half are the mare's expelled breath in the cool winter air, backlit by the low sun.
I'm happy to report that my photo website is very close to being a reality. I'll post details once I have enough images loaded to make it worthwhile checking out. In the meantime, there are lots of photos to be seen (although not all are my "art" images) on my personal blog, along with stories of life on the Canadian prairies from my perspective.
Posted by Judy Wood at 7:09 AM 2 comments:

Order deadline of february 28, 2009 for the Book: Children & their 4-legged friends, a series of watercolor paintings & poems.

Order your 'First Printing' now up until February 28, 2009 to be delivered by Easter and in time for Mother's Day!!! Orders are taken on Debbie Flood's website at: http://www.debfloodart.com or email Debbie at debflood@debfloodart.com
This book houses 40 of the best children and horse paintings that Debbie created between the years of 2004 and 2007. Many are from the Waldo County Riding and Driving club, Belfast, Maine Horse shows. Others are from the Joy Valley Riders Horse shows in Knox, Maine. And still others are from Debbie's own past with horses, including her father as a child!
If you are a fan of Debbie Flood's children with horses paintings, you won't want to miss this rare book!
This book also houses 14 new poems that Debbie wrote herself! Each poem is written for the painting or paintings that they are grouped with. They range from the fantasies that little horse crazy girls dream about, to the spiritual representation that the horse stands for and how Debbie feels about horses from her past. A true treasure of a book if you love horses, art and children.
Posted by Unknown at 12:42 PM No comments:

My kingdom for a horse... 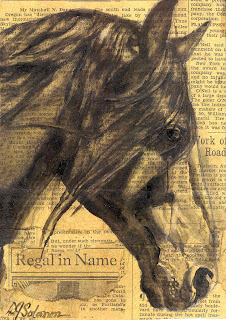 I've always loved horses. Guess there's a lot of us that can say that, right? I've always been interested in drawing and painting them too. About six years ago I got fired from my part-time job (oops!) and decided to start painting for real. I've learned a lot and am starting to define my individual style. It has to do with vintage papers (80-120 years old) and horses. Not only is it fun to do, but the adventure of uncovering these old papers buried amongst the 'stuff' in antique stores is reminiscent of hide n' seek when I was a kid! And I just love the feel of the papers. I'm excited to do many more paintings on vintage sheet music, old newspapers, books, etc!

Here is the second painting I did on vintage paper. It's from a 1927 Oregon Journal. I found an ad for the brand new Buick Regal automobile... hence the title "Regal in Name'! Her real name is Julianne, but I call her Jewels. She is a very Baroque Friesen with lots of mane, tail and feathers.
Signing off from my very first blog ever! Diane

I love this quote from Giorgio Morandi: "A sincere artist is not one who makes a faithful attempt to put on canvas what is in front of him, but one who tries to create something which is, in itself, a living thing." 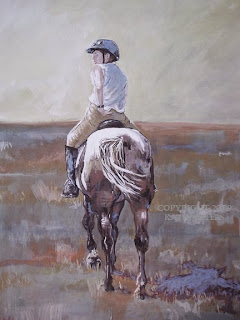 Here is a close up of the subject of the finished casein "Start Of A New Day", 18 x 18" on canvas. I put the last brush strokes on it today. [ I promised myself that I did!!] And the rest of the day was spent trying to fix my router for my DSL. It seems to be working now. I will keep my fingers crossed.
I also have several sketches I have worked up for a couple of new paintings.
But I do want to get back to doing some more of my family images / mixed media work. Some of the work done so far can be seen on my website in the Figurative Collection. It is a stretch from doing equine art, but I am feeling the pull to get back to that. This work has me playing with acrylics and casein mixed with some collage thrown in for good measure.
In the meantime I will be getting my thoughts together about what is happening to me this year, artistically and career wise. Good things are happening.....but I still have a hard time getting all my "ducks in a row".......paddling like crazy under the water....but skimming along it seems on the top!!
Heh...I am still afloat!!! and that is great!
Posted by Kpeters at 12:59 PM 2 comments: 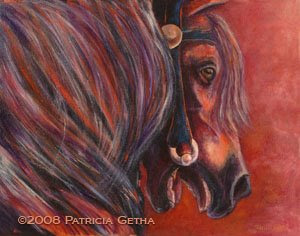 This painting is a whimsical rendering of a carousel horse from the Columbus Zoo in Ohio. It is not my typical style but was fun to work on.
Posted by Patricia Getha at 11:14 AM 2 comments:

How to paint the horse in watercolor - CD ROM

I have been updating my website. You can now purchase this CD ROM, How to paint in watercolors, the horse standing, through a Paypal cart on my site. Click on the 'Books & gifts' page on the site to order your CD ROM. This is an instructional CD and it is in a book format. It opens in a PDF file.
I also now have a Paypal cart button for my new book, Children & their 4-legged friends, a series of watercolor paintings & poems. That is listed on the same page as this CD ROM.
Happy shopping!
Debbie

Posted by Unknown at 3:53 PM No comments: 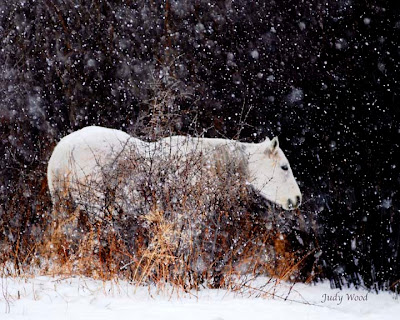 More of my ongoing "horses in snow" series. Writers are always told to write what they know and what is around them, so on that theory I'm stuck in snow mode. Will eventually work around to "dust" shots in the heat of the summer. One thing about where I live and shoot (Saskatchewan, in the middle of the Canadian prairies) is we do get seasons, although spring can be more like a couple of days than an actual season, some years.
So far this winter is a record-breaker for cold in the month of December, and we usually don't even get our serious stuff until January and February. Brrr. Good thing, though, is that we have had a number of small but pretty snowfalls, as in this shot, and I rush out to my favorite herd whenever I can if it's snowing.
This grey mare is often by herself sheltering in the bushes. The other members of the mare herd aren't far off,  but she doesn't seem to have anyone to buddy up with, whether by choice or not I don't know. Greys are often treated as "outsiders" so that could be the case here, or perhaps she's just an independent spirit.
The photo had a bit of a soft focus due to the big feathery flakes that were falling heavily when I took the shot, so I pushed it a bit in Photoshop to make it even softer and more impressionistic in look.
All my art photos are for sale. Contact me at  judywood@sasktel.net to inquire. Matted 8 x 10 prints (mat size is 11" x 14") are $40 Canadian. Larger sizes are more, smaller less. See more of my photos and writing on my blog, and thanks for looking at this one.
Posted by Judy Wood at 5:34 PM 2 comments: