This painting is slated for my Solo Exhibit in the International Museum of Art of El Paso, Texas, July and August of 2013.

This painting depicts the Warrior who has been honored with this red shirt, for his deed and generosity. Awarded as a special shirt by the Warrior's Society. The shirt is embellished with Ermines on the sleeves.

The War Pony wears a captured Cavalry bridle that has been decorated with rawhide strips covered in shell casings, brass beads and red and white heart beads. Warriors thought that the thing taken from the enemy during or after a battle would transfer the power of that person to them. Because the bridle is decorated in the shell casings, it gives the war pony the power to ride through hails of bullets with out being harmed.

Thank you goes to Debbie Herzman and her Appaloosa horse, Scooter. For reference images to use for the painting, and for describing what the pieces are.

A western collage with buckskin horses. 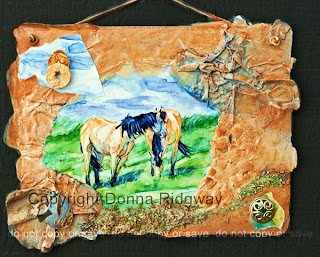 I've always wanted to experiment with collage but not known where to start.  Then I discovered you tube!  You can find videos that teach you how to do a lot of things there.  I watched several artists create collages, journal pages etc...then started in.

In this collage, I began with a hard board, and lots of gesso.  Then began to glue and add paper and objects .  After that, I added the paint.  This is a collage done with a print of one of my original paintings, called "The Breezy Buckskins".

I find collage totally absorbing.  It's such a "thinking, problem solving" medium.  Since I began this kind of work, I find myself coming in from the studio at night, with feelings of exhaustion! :)  I think that's what I love about it most, it's a challenge.  But I felt the end result was worth it.

You can find this horse art collage for sale in my Etsy shop.
Donna Ridgway
Posted by Donnaallen at 12:31 PM No comments:

Blue Mustang is a painting I did from my trip to the Monero Mustang Sanctuary in Teirra Amarilla, New Mexico.

This painting is available for purchase through the Angel Fire ArtSpace Gallery, Angel Fire, New Mexico.

Ships from the Deborah Flood Studio

Platedero is a Spanish Mustang Band Stallion I had the privilege to photograph and whisper to, this past Summer in Tierra Amarilla, New Mexico. A Northern area of New Mexico, up in the Mountains.

Platedero is a slang Spanish/Hispanic word for ‘Silver’. He was named for his silver coloring when he was born on the Monero Mustang Sanctuary in New Mexico.

Giclee Prints will be available of this painting sometime this coming Winter. The original painting is slated for the solo exhibit at the International Museum of Art of El Paso, Texas in July and August of 2013.