Queen of Hearts, Cowgirl and Appaloosa Horse by Deborah Flood

"Queen of Hearts"
Watercolor. 10.5 x 12 inches. Cowgirl and Appaloosa Horse.
This one is brand new! The paper is still a bit damp!!
And, it is available on my website with a PayPal Button! There is only 1, so, first one to use the button/check out, gets it. Free Shipping in the USA!

Follow this link to view details and purchase:
http://debfloodart.com/dataviewer.asp?keyvalue=16554&subkeyvalue=1304010&page=WorksZoom

This year’s judge is renowned artist Aleksander Titovets. As a painter, Aleksander gravitates to what he calls “quiet paintings”, paintings which reveal a reflective and optimistic spirit. Titovets has been a guest speaker, art teacher, and juror since coming to the United States. Although the painter now resides in El Paso, Texas; he finds his inspiration in memories of his homeland. Some of his noted credits include “Best of Show” at the International Fine Art Competition for four years in a row. Also his portrait of former First Lady Laura Bush created “The First Ladies Gallery” in the Smithsonian National Portrait Gallery in Washington, D.C.

Limited Edition and Open Edition Giclee Reproductions are available of this work through the Studio.

The Saddle on this Pony is a 1904 US cavalry enlisted man's saddle. To a warrior it would be a prized war trophy taken from the enemy and displayed as such, either if he was just on horse parade or he might even use it in battle.

If you saw a chief/warrior dressed in this manner - with full head Bonnet and the leather clothing, chances are he would not be going into battle, but rather on parade displaying all his trophies, as well as his honored war pony before everyone.

The background landscape was derived from Deborah Flood’s own photographs and experiences in several Western States.


After a long hiatus from the studio due to various health issues, I'm finally finding time and energy to get back to painting. Since Glory is the closest work in progress to being finished, she is the first up on the easel.

When last I left off working on her, I had corrected some drawing errors and had begun the second color layer. It's hard to tell where the second layer ends on her head and what is still the first layer. I briefly toyed with leaving it that way, but there are still too many unresolved areas yet to make that final decision.

So far I'm very pleased with how this painting is looking and am anxious to finish it. Glory was my horse's best friend when I first bought him. She was a broodmare who died during foaling years later. I was fond of her too which is why I felt she deserved to be immortalized.

Include Your Name In Your Post Title! Reminder From Karen Thumm

I'd like to remind all you artists to include your name in the title of your posts so that readers know right off who you are. Don't make your readers search around for your name. Many won't bother.
Posted by Karen Thumm at 7:01 AM No comments:

I currently have six paintings going right now It's amazing what feeling inspired will do for you! Three of them are horses and since you have asked here is a Work in Progress of one of them. I won't be divulging the name or final of this boy until it goes to it's new home.

The sketch. I did several variations on the sketch and I like the composition of this one the best. I'm using Arches 300 lb Hot Press with a very smooth, bright white paper and is probably one of favorites because it is very suited for the way I like to work. This piece measure 14 x 11. 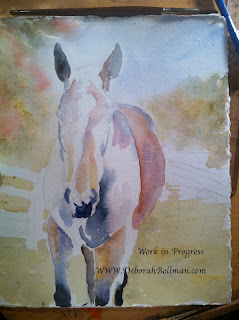 Starting to lay in the darks and modeling the musculature. As soon as I start adding some of the darkest darks the light seem to appear from nowhere. 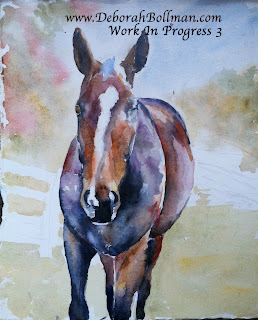 Holiday Portrait Gift Commissions
THe holidays are right around the corner! Time to start thinking about commissioning those holiday portraits. I've already have a few spots spots booked! If you are thinking of giving the gift of a horse, dog or NFL football portrait/painting, please, don't hesitate to contact me. The process is super easy to get started! For more info drop me an email atdeborah@deborahbollman.com

Drawing Henry was easy.
A warm friendly aura encircled him, reflected in his eyes, echoed in his sun-bleashed forelock, highlighted by his bold sprinkled blaze, completed by his soft snuggly nose.
It was an honour to immortilise this noble soul.
It is so easy to see why he is sorely missed. 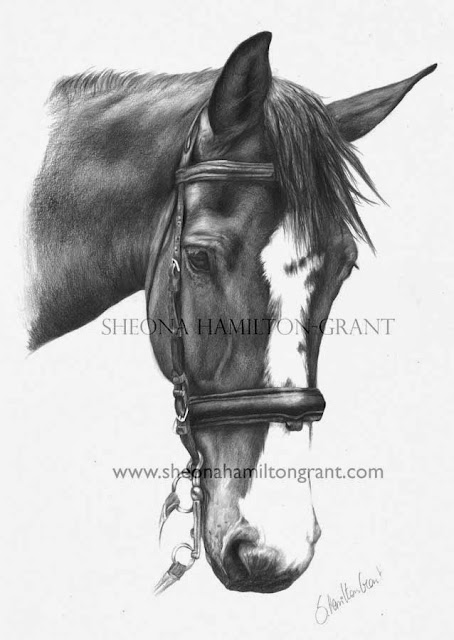 View more of my work at www.SheonaHamiltonGrant.com
Check out my blog Black on Grey on White sheonas.blogspot.com
or simply find my on Facebook sheonahamiltongrantartist.com
Posted by Unknown at 12:11 PM No comments: